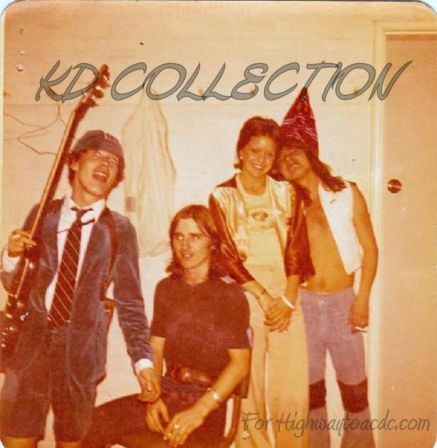 - Karen, which role had music in your life inn the beginning of the 70s ? What were your favorite bands ?

In the beginning of the 70s I was nine years old and loved The Partridge Family and David Cassidy but upon starting high school I had two favourite bands being Sherbet and Skyhooks. It was at a Skyhooks concert that I first saw AC/DC supporting them at the Hordern Pavilion in Sydney in 1975.

- How and when did you discover AC/DC ?

I first heard of AC/DC when they appeared on Countdown (a national music show) so I was looking forward to seeing them support Skyhooks. They wanted to make an impact on the fans so we wouldnt forget them and staged a huge fight at the end of their set....... I certainly didnt forget that or them !! 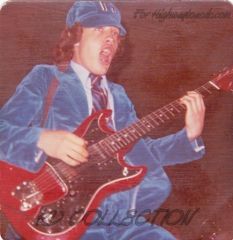 - Do you remember the first time you met the band ?

I first met the band on the 7th February 1976 at the Hurstville Civic Centre, which was a local dance. I knew the manager of the dance who let me backstage to meet them

"Determined" - they knew they were going places !

- Had you seen the band live or on TV with Dave Evans or before Mark and Phil joined ?

No I wasnt aware of AC/DC before Bon joined.

- Tell us about the recording of Dirty Deeds Done Dirt Cheap you attended in big part ? how was the atmosphere of work ? Were the songs already written ? What was everybody's role ? What about George and Harry's involvement in the production ?

The times I spent in the Albert Studios during Dirty Deeds was an interesting and exciting time. Unfortunately I wasnt there when Bon did any vocal recordings but watched Malcolm recording the backing vocals for Dirty Deeds (took me ages to figure out he was singing "Dirty Deeds and there done dirty cheap!" I saw many of the backing tracks being recorded and have included a few pics. George and Harry were very involved helping the guys lay down the tracks whilst Bon spent time in the kitchen and offfice writing lyrics to the songs as they recorded them. I still have an original copy of a few of Bons songs from that time that I will be selling on ebay as part of the kdcollection. The atmosphere was hectic and I would go and get their lunch etc when needed.

- From what we can see on the pictures, looks like the atmosphere was not too studious but rather very fun. Can you confirm ?

There were fun times in the studio but it was mostly "heads down and lets get this album recorded !"

- What are your best memories of these recording sessions ? Do you have any anecdotes ?

My best memories of this time in the studio is the time I spent with Bon talking during breaks.. He was a lovely man and always fun! It was such a buzz to sit on the lounge looking through the studio window and watching them let loose. 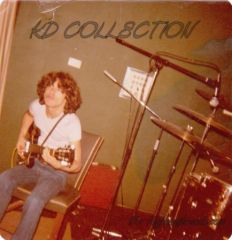 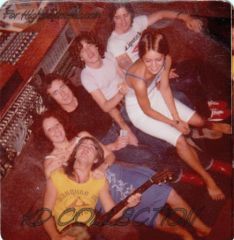 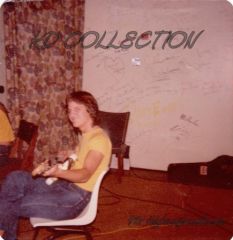 - With which band member did you have the best relationship at that time ?

At the time Malcolm and I close friends but I always enjoyed a good chat with Bon.

- Tell us about Bon Scott? What kind of guy was he ?

Bon Scott was a great guy! He would always be there for his friends and offered me the use of his hotel room once when I was having troubles at home. I dropped into see him on his birthday in 1977 to give him his gift and was promptly told to take a seat and he would be back soon..... Well ! He came back with a bottle of vodka, a bottle of tequila, OJ, lemons and salt. I spent the afternoon with him drinking, chatting and laughing whilst the other band members dropped in the wish him happy birthday. It was a great time which I will never forget.

- How did you react to Mark's eviction and the arrival of Cliff? Do you know why Mark left ?

I was very unhappy when I found out that Mark had left they band as it came out of the blue for us fans from Australia. When I met Cliff and saw him play live I knew he was a good replacement but didnt find out the reason for the change until I talked to Mark much later. 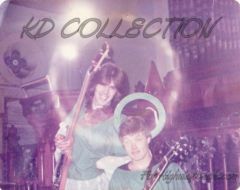 - Were you there for the recording of Let There Be Rock ? or was it starting to be difficult to approach the band ?

I wasnt there during the recording of Let There Be Rock but was there for the filming of the clip. It was made in a church in Edgecliff, a suburb near bondi beach (it is the corner of jersey road and moncur street edgecliff (bordering on paddington) nsw.... about 3 kms east of the heart of sydney on the way to bondi..). That was such an awesome day ! I was their "gofer" and got them some lunch and quite of few bottles of Green Ginger wine to get them through the day. Maybe that was the reason Bon hurt his ankle when he jumped from the pulpit !! I had some part in the clip, I was front row centre so you can see me rocking up the front! Also when Bon lifts his arms up in the air was my idea to the producer (I told him that this was the way that priests let the parishioners know to stand in church) 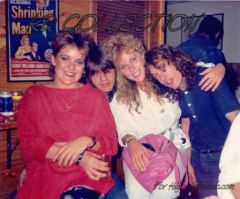 - In our first email correspondence, you said you lost contact with the band in 1986 because they became "too famous". Does this mean the band started to be a bit big-headed ?

No band wasnt big headed just we were moving in different circles. I had been in a relationship and wasnt seeing my normal crowd of people. I ran into Malcolm and Angus at a nightclub in Sydney in 1986. Was so good to see them as I hadnt caught up for a few years, plus its very rare to see Angus in a nightclub!! We partied all night and most of the next day! After that they went back OS and I got married and had children so I havent seen them since unfortunately.

- How did you react to Bon's death announcement ?

I found out that Bon had died on my way to work on the bus. There was a small story on page 4. I couldnt believe it! Of course once more details came through it was all over the papers

When I next talked to Malcolm and Angus I voiced my disapproval of Brian (a feeling shared by most Australians).... he just wasnt AC/DC !! Now I have grown used to him and thought he rocked when I saw them on the Black ice tour.

- Have you seen the Band live on the Black Ice tour ?

I saw the Black Ice tour in Sydney and took my 14 year old son to his first concert...... We both loved the show ! It was the anniversay of Bons death and they played a lot of the songs from Bons time with the band and showed a lot of old pics of him on the big screen. They hadnt played in Australia for a long time and they broke all records for concert attendance. 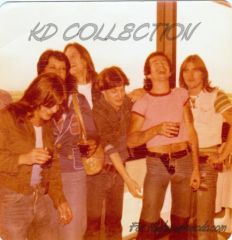 - Why did you keep of these memorabilia ? Are you nostalgic ?

I kept all of my memorabilia as they were my favourite band and I had collected so much. Though probably if it wasnt for my mother still living in the house I grew up in, I would not still have them. I thank her for storing it for me all these years!

- Pick one and only one thing you would keep with you out off your collection ? Why are you choosing this one ?

If I could keep anything out of my collection if would be the manuscript of Bons. There is one complete song called "rock n roll blues" and song ideas for about 4 others. But I do think it is time to hand it over to other fans and will be selling this as the last piece of my collection on ebay.

- Did you participate in the Family Jewels exhibition in Australia or in other projects in relation with AC/DC ?

I didn't participate in the Family Jewels exhibition as it was already set up when I found out about it. I did go and see it and found a picture of me and Angus at the airport on show! 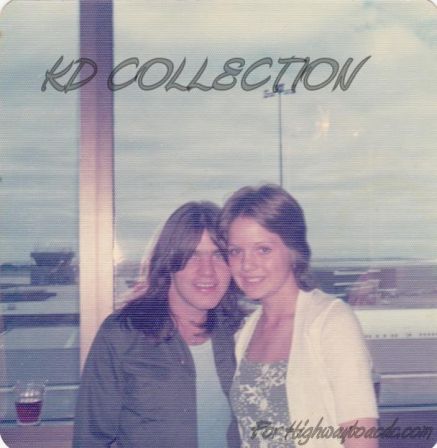 - Thanks Karen for this story, and for your experience with the band.

The first time I saw them live at the Hordern Pavilion Sydney...... this is apparently a rare pic of Angus with this guitar... I was very proud of this pic with my old 126 film camera with flash cube :

The second time I met them..... Hurstille civic centre : 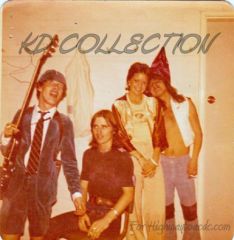 During the recording of dirty deeds album : 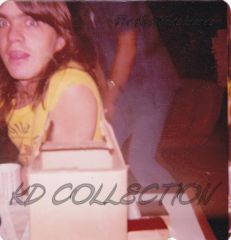 Angus and Cliff and the filming of the Let There Be Rock film clip :

The day they left Mascot airport, sydney to rule the world !! It was a farewell do/press conference with Molly Meldrum filming a bit for Countdown.... (national music programme on the ABC at that time) 1976/04/01 : 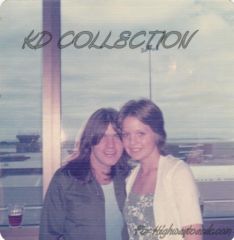 When I last saw Malcolm and Angus :

She is also the one to thank for keeping all the memorabilia that I have of AC/DC as I moved so much in my life and she never threw it out from my old room until she gave it back to me 10 years ago. She hated them as a mother does when you have a 16 year old daughter but still bought tickets for myself and my son (his first concert) to see them for their Black Ice Tour....