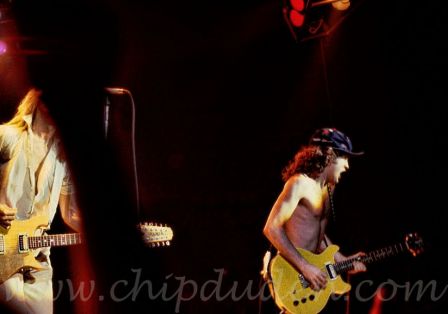 - Why have you stopped for about 20 years?

I really donât have a good reason for that! Laziness and youthful stupidity I guess. When I went to college at University of Nebraska Lincoln, I interviewed for a photographer position on the year book staff which I didnât get. I was really pissed off as I knew I was a good photographer. But Iâd had no real formal training and they were asking technical questions that I didnât know. I just said âI donât knowâŠI just take good pictures.â Ha. That wasnât good enough! From there I just lost interest for a while. I started taking pictures again when my kids started getting into sports. Then I gradually started to go to clubs and start shooting bands again. Now Iâm the house photographer at an outdoor venue called Stir Cove in Council Bluffs IA and also at the new Pinnacle Arena in Lincoln, NE. And Iâm still not a technical shooter so donât ask me detailed questions about gear! 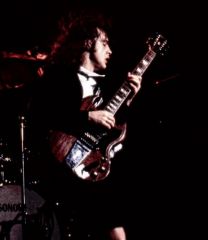 - Were you more into Cheap Trick or AC/DC?

I was really into both of them at the time, which is one of the reasons it was such a great show! I remember wearing the grooves out of âHeaven Tonightâ and âIf you want Bloodâ I just love Riff Raff on that live album-still gives me chills!

At the time I thought it was spontaneous, but now realize it was part of the set. ACDC was the opener and Angus, Malcom and Bon came out at the end of the Cheap Trick set during the encore. My memory is very hazy, but I believe they played Sin City and a Chuck Berry song.

- What are your memories from Omaha's concert in 1979?

AngusâŠnon stop energy! Bon ScottâŠjust the coolest, most rock and roll guy Iâd seen. I remember Angus getting on Bonâs shoulders and parading through the floor of the arena-during Rocker I think-SO COOL! I remember they came very close to me but I donât think I took any pictures because I wanted to save film for Cheap Trick and I was afraid security would see me with my camera and I didnât want it taken away. 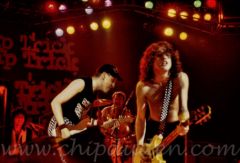 - Did you shoot AC/DC during other live performances? How many times have you seen them live?

That was the only time Iâve shot ACDCâŠIâve seen them (thinking, thinkingâŠ) I believe four times total, â79, Back in Black TourâŠsome time in mid 80âsâŠthen not again until 2009. I got my son really good seats for that one and he actually got some great shots with my little canon camera!

- You recently met with Cheap Trick? What was their reaction to your photos?

That was actually a really cool experience. They were playing Stir Cove last summer and I brought some of the old photos I took of them in â79 hoping to get them signed. They invited my wife Lori and me into the green room and invited us to have a seat. They then sat there and worked on a new song together for about 15 minutes while we just sat there, the only other people in the room-our own private concert! They then looked through and signed all the photos. They particularly liked the photo of them with Angus as they said they hadnât seen many like that. Tom Petterson (bass) really liked it as he was in the shot and said the only other shot heâd seen of him with ACDC was from a show in France on that tour(ironic huh???) They were very, very nice guys.

- Did jamming sessions ever happened again between them two?

That tour I believed they jammed most if not all shows. It seemed like they were really having fun from what I recall. And I think based on what Rick, Tom and Robin said last summer they did have fun.

- How would you describe AC/DC band members' personnalities behind the curtain?

Unfortunately Iâve never met the legends but would love to!

- Do you recall anything special about Bon Scott?

Bon Scott was just so charismatic! Just the way he stood and staredâŠhis funny little dance. Everything about him was rock and roll testosterone! One of my all time faves!

- To you, what does AC/DC represent in the RNR History?

ACDC is one of the pillars of rock and roll. To me bands like ACDC, Aerosmith, Led Zeppelin and Black Sabbath are my foundation of rock and roll! Which band impressed you the most as a live act? Man, that is a hard one as Iâve seen so many great shows (and a lot of shitty ones!) ACDC is always good-I feel very lucky to have seen them with Bon-Iâve got many friends younger than me that are very jealous of this-one advantage to being old. KISS is probably my all time favorite live band. They were my first concert in 1977 and they got me hooked on what I call âthe pageantry of rock.â I want to be entertained at a rock showâŠI donât think all bands do this today which is unfortunateâŠthey need to learn the pageantry of rock and entertain your eyes as well as your ears! 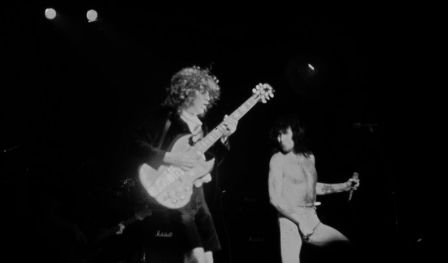